This version brings a few fixes and new features, hence the version jump. Features Include: 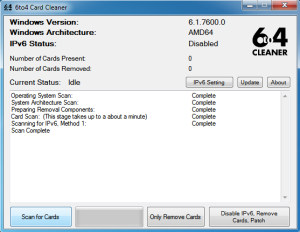 This new version of 6to4 Card Cleaner adds the full Microsoft process of fixing the problem; the program will disable IPv6, remove the cards, and then run KB980486. There still is a option to just remove the cards.  Added features also include an updater, a window that allows you to set IPv6 to any of the 6 settings, and a new backend.

I also took out the window that lets you change the IPv6 setting, and made it its own app, so if you need a user to just change IPv6 they can get this 70kb app.

As always any bugs please report them, I will patch and the automatic updater will alert users a new version is available. Source available on request.

Multiple versions of Windows, mostly Windows 7, support IPv6 networking, and if your network doesn’t support it, and the machine wants to link to a site or computer that does, it will make a virtual IPv6 to IPv4 converter card. Now sometimes Windows doesn’t reuse them, or delete them. So in this situation these cards keep being added to the system, adding and adding. Eventually the use will attempt to connect to a local server, or some other service, and Windows will try every card first, and then fail to connect. Timing out even though the real connection has no fault. It appears at around 180 virtual cards we start to see this. The solution is removing all the cards, but Windows wants you to remove them one at a time. Microsoft does have a tool for removing devices in a systematic order, but you need to get the one for your architecture, and some of these need you to download a large package and extract it. So I decided to make it simple, download and run my tool and it will remove these cards for the user. After the removal the user will need to reboot but then they can connect.

Now this doesn’t keep the computer from adding more cards in the future, and I don’t want to disable IPv6, for it is slowly rolling out and when the user actually gets it they should be able to use it. So the current release, v 1.2.2, has a few command line arguments, and will run in graphical mode if no arguments are presented. It is very simple, a few buttons that do their jobs. In the future I want to add a scheduler option, that will allow you to run it monthly automatically so if this problem persists it isn’t a pest, along with a updating function so no need to download a new version if installed.

The download link is below, it requires .Net 2.0, which is already installed on Windows Vista and Windows 7.