I saw online someone who made a tiny Mac (The Verge) and thought it looked like a neat project to attempt. I started by selecting the original Macintosh as the template I wanted to emulate.

Several people had made 3D models of the original Macintosh over on thingiverse.com, I used a combination of those and other sources online including photos to make a cleaned up model for myself in Sketchup. After having that model I went about breaking down how I would make it.

I recently have been using laser cutters for fun at TechShop, so I made the body of the machine out of clear acrylic. Then 3D printed a face plate that was glued onto the acrylic case. After that, it was painted with several coats of spray paint. I left the back door off so that I could work on installing the electronics, and setting up the software. That will be another article later.

The first unit I made was for myself, then two more for friends; the original one never got painted, I thought the clear body was neat and showed off the internals. It also gave me a good model to hold when working with the opaque other units.

Each unit had a little screen that connected to a Raspberry Pi via a ribbon cable. Then a USB port in the front where the old unit had a keyboard port. The back had a ethernet port for updating the system itself, audio out, and micro-USB port for power. One of the hardest parts of the project was finding a ribbon cable that could handle the frequencies and work between the screen and the Raspberry Pi. A lot of the GPIO ribbon cables online actually flip what wire is in the 1 position with its neighbor; my solution was a 6 inch IDE extension cable. The cable can handle high frequencies, as well as fit the pin out perfectly. 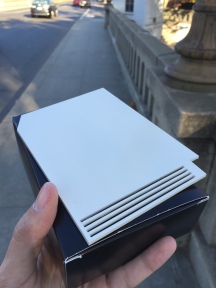 After testing several different color paints, I ended up using Rost-Oleum Ivory Bisque semi-gloss as the beige shade. All the sides were glued together except the back, The back was held on by tiny brackets that were 3D printed and then screwed into. This allows access to the inside without breaking glue somewhere. Originally I was going to attempt to put a little handle on it, but that increased the complexity; in the end the top is flat.

All the laser cutting and 3D files I used I tracked with Git over at https://github.com/daberkow/minimacparts . I will put a few photos of the clear unit below, and of the final unit. Then later post another article about the electronics, and software to run it. There are also photos of the many many attempts at different sized bodies and painting side panels. My original model was almost exactly 1/3rd scale. Then I had to make it a tiny bit bigger because of the screen I used.

Standard disclaimer that I do not own or hold any rights for the Macintosh name, or Apple logo. I do this as a fan for fun. 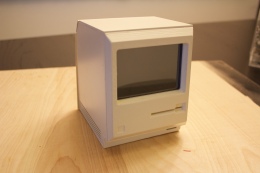 Final model next to clear unit

Side shot of clear unit 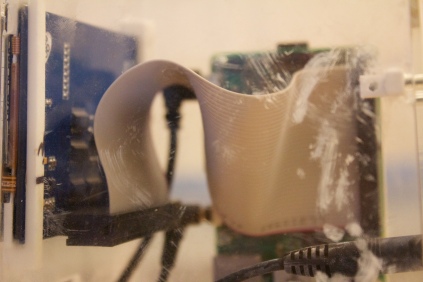 Close up of clear unit side 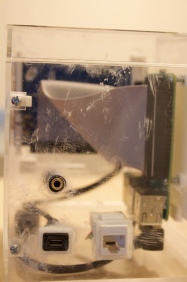 Back ports and brackets

Many attempts with different ideas and 3D printer settings.